PRIESTS OF OUR PARISH

Very Rev. Fr. Dripoun Bedzakian, 1913 – 1916: Fr. Bedzakian was born in Sepastia, Turkey, and was ordained there some years later as a celibate priest.
Very Rev. Fr. Levont (Ghevont) Martoogessian, 1917 – 1919: Fr. Martoogessian, was ordained a celibate priest on October 14, 1899, in the Armenian Church of Our Savior in Worcester, MA, the first ordination of an American priest in America.

Rev. Fr. Sahag Der Bedrosian, 1922 – 1926: Fr. Bedrosian was born in the Armenian province of Marash, Turkey, in 1877. He was the 21st priest in his family. He was loved and respected by all the parishioners of St. Peter Armenian Church.
Rev. Fr. Yeghishe Kalchinjian, 1928 – 1930: Fr. Kalchinjian was born in Bolis (Istanbul), Turkey, in 1876. Besides St. Peter Armenian Church, he also served churches in Marseille, France; Lowell, Lawrence, Wocester, and Watertown, MA; Providence, RI; and Los Angeles, CA.

Rev. Fr. Levont Paroonagian, 1934 – 1938: Dicran Paroonagian was ordained a deacon in 1934. Later, he became a priest and was assigned to the Troy Church which he served as pastor for four years. He then moved to California.

Rt. Rev. Bishop Papken Varjabedian, 1946 – 1950 and again from 1952 – 1956: During his tenure as a pastor of St. Peter Armenian Church, Bishop Papken established the Mr. and Mrs. Club, an ACYOA Chapter, formed the National Choir Organization, and initiated Choir seminars

The Very Rev. Fr. D.V. Mesrob Semerjian, 1950 – 1952: Fr. Mesrob Semerjian led an ACYOA Pilgrimage to Jerusalem in 1955. In 1965, at the request of His Holiness Vasken I, Fr. Semerjian visited communities in Venezuela and Latin America to minister to the spiritual needs of the faithful.

Rt. Rev. Bishop Hmayak Intoyan, 1962 – 1967: Fr. Intoyan was ordained bishop in Etchmiadzin in 1974. He served his church for more than forty years in various capacities.

Rev. Fr. Tateos Abdalian, 1989 – 1993: Fr. Tateos grew up in Boston, MA. He graduated from St. Nersess Armenian Seminary in 1983. Fr. Tateos endeavored to enrich the youth programs of the parish during his pastorate with St. Peter Armenian Church. The growth of the Sunday School program into the new century began during Fr. Tateos’ pastorate.

Rev. Fr. Masis Galstian, 1994 – 1995: Even though Fr. Masis was with St. Peter Armenian Church for a brief time, in that period, he emphasized the training of deacons and improved the morning services which encouraged attendance at this service and Sunday Badarak (worship service). 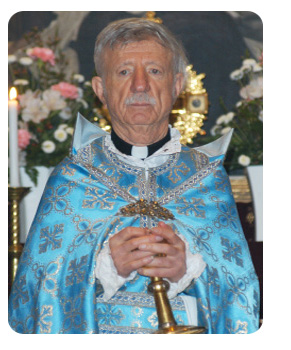 Rev. Fr. Garen Gdanian, 1970 – 1989: Rev. Fr. Garen was born on February 11, 1925 in Aleppo, Syria. His given name was Sarkis. He attended local Armenian Schools including Nersessian School, Zavarian School, and Gertasiratz School. At the age of 13, he entered the Armenian Seminary of Jerusalem and studied there for six years.
In 1944, he returned to Aleppo and taught in the Zavarian Armenian School for one year. From 1945-1947, he studied at the Armenian Theological Seminary of Antelias, Lebanon. In 1947, Fr. Garen came to the United States upon the invitation of then-Primate, Archbishop Tiran Nersoyan. He studied at the Episcopal Theological School in Cambridge, MA. He graduated from that school in 1950 and received his Master of Divinity degree. He continued his studies at Harvard Divinity School. The famous Armenian philanthropist, Mr. Alex Manoogian, paid all the expenses of Fr. Garen’s schooling.

Fr. Garen was ordained a deacon in January 1948 and was assigned to to the Lowell Armenian Church as deacon-in-charge. On December 19, 1948, Archbishop Tiran Nersoyan ordained him to the holy priesthood at St. Vartanantz Church of Lowell, MA. Fr. Garen served as pastor of the church for nine years. In 1952, Fr. Garen married Zabel Kludjian, having three children.

In 1964, he was awarded the pectoral cross. In September 1957, Fr. Garen became the pastor of St. Gregory the Illuminator Armenian Church, where he worked until 1970.

Fr. Garen was elected pastor of St. Peter Armenian Church of Troy (and later in Watervliet), NY in 1970, and came to his new parish in September of that year. Fr. Garen served his third parish for 19 years. He retired from pastoral work in September 1989. In 1977, Fr. Garen received his floral Pilonium, and in 1984, he was elevated to the rank of Avak Kahana. He served on the Diocesan Council from 1971-1975.

Fr. Garen continued his studies by joining various workshops and seminars and by attending courses at the University of New York at Albany and Siena College in Londonville. He served as a member of the Watervliet Clergy and a member of Capital Area Clergy support groups. In his retirement, Fr. Garen always helped out by filling in as a priest when needed throughout the Diocese. He has served churches in Houston, TX, and Cleveland, OH, as well as mission parishes in Florida. Fr. Garen traveled twice to Armenia on a preaching mission. Fr. Garen passed in 2013. 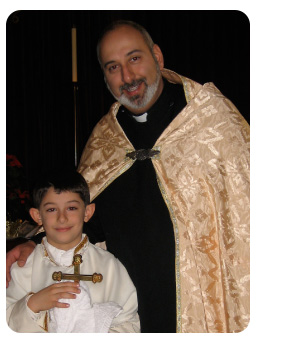 Rev. Fr. Stepanos Doudoukjian, 1995 – 2007 and 2010 – Present: Rev. Fr. Stepanos Doudoukjian came to St. Peter Armenian Church in Watervliet, NY, in November 1995 as Deacon Gregory, Deacon-in-Charge of the parish.
Born and raised in New Jersey, he is the son of Sona and the late Charles Doudoukjian of Teaneck, NJ, and the youngest of four children. Throughout his high school years, Fr. Stepanos attended religious conferences and retreats at St. Nersess Armenian Seminary in New Rochelle, NY. It was there that he first heard God’s “calling” and it was there that he met his wife, Paulette (Kasparian). It was the summer programs at the seminary that helped surface the seed of priesthood that was already planted within him.Fr. Stepanos, who comes from a family of bankers, originally went to Bergen Community College in New Jersey, where he majored in banking and finance for one semester, after graduating from high school. He changed his major to early childhood development and earned his Associates Degree. He then transferred to Dominican College in Orangeburg, NJ, where he earned his BA in elementary education. In 1993, he graduated from St. Nersess Seminary and St. Valadimirs Theological Seminary in Crestwood, NY, receiving a Master’s Degree in Divinity. He also received special commendation for his Master’s Thesis titled, “Oral History: An Intergenerational Study of the Effects of the Assassination of Archbishop Leon Tourian in 1933 on American-Armenians.”

Fr. Stepanos has traveled to Armenia on two occasions. In 1990, he spent two months studying with the University of Michigan summer study program. He also went for three weeks in 1992 to do missionary work with St. Nersess Armenian Seminary. Following his graduation, he spent some time in the Old City of Jerusalem studying Armenian and Liturgics.

During the years 1994-95, prior to moving to the Capital District where he now resides, Fr. Stepanos worked as a pastoral assistant and youth director for the Armenian Church of the Holy Martyrs in Queens, NY, and at the Diocesan headquarters in the youth ministry department, where he focused on college ministry.

In February 1996, as part of the traditional Armenian ordination ritural which was held at St. Peter Armenian Church in Watervliet, New York, Deacon Gregory was given his new name, Stepanos, as he was ordained a priest in the Armenian Church by His Eminence Archbishop Khajag Barsamian, Primate, . Dn. Gregory requested the name Stepanos, Armenian for Stephen, in honor of his deceased twin-brother. Following the ceremony, Fr. Stepanos spent his Karasoonk (40-day secluded retreat) at St. Nersess Armenian Seminary. He celebrated his Antranig Badarak (first Divine Liturgy) at St. Peter Armenian Church on Palm Sunday, March 31, 1996.

In January 1998, in addition to his parish ministry, His Eminence Archbishop Khajag Barsamian assigned Fr. Stepanos the position of Director of the St. Nersess summer and winter conferences for Armenian Youth, a position which Der Stepanos presently still holds. As Director, Fr. Stepanos organizes and implements seminars for Junior High, High School and College-aged Armenian students.

In 2006, the Primate presented Fr. Stepanos with the pectoral cross in honor of the 10th anniversary of his ordination to the priesthood.

On July 1, 2007, Fr. Stepanos was assigned as the full-time Director of Youth and Vocations for St. Nersess Armenian Seminary. His emphasis was on recruitment of seminarians. He also continued to direct the summer programs as well as organize other youth programs for the seminary.

On Sunday, September 12, 2010, Fr. Stepanos returned to St. Peter Armenian Church to serve as the parish priest once again for “round two”. The return to the Capital District and St. Peter Armenian Church has been a blessing both for Fr. Stepanos and his family as well as the parish community. His initial emphasis is to encourage young families to embrace the Armenian church and participate on Sunday mornings. Also more educational and spiritual programs will be implemented under Fr. Stepanos’ tenure.